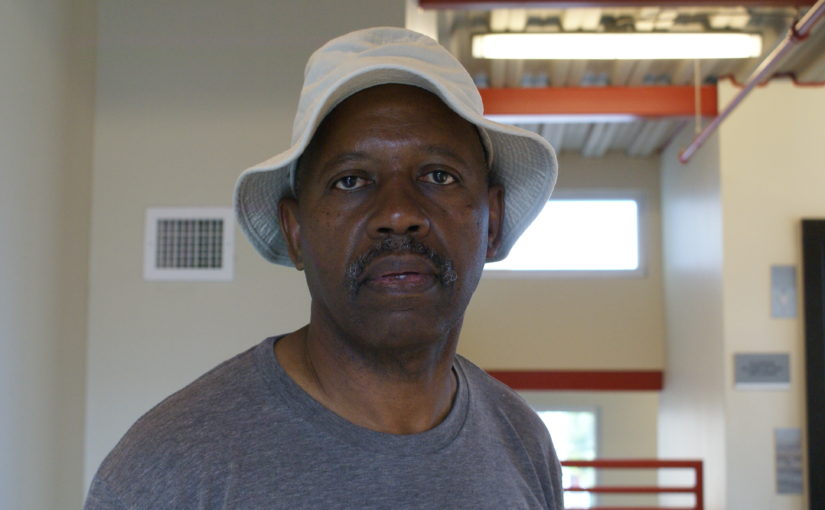 Norris Henderson clearly remembers the day in 2004, when he was allowed to leave “Angola” after spending 27 years in Louisiana’s largest high security prison for a crime he says he didn’t commit. He stepped out onto the driveway. His wife was waiting in a car to pick him up. That moment, the gate opened, and a prison van drove past, taking inmates to court-hearings in New Orleans. They waved and knocked on the windows and Norris waved back. “Just a few days ago, I had been on that van, going to my last hearing. Now I was out, getting into a car. I realized I was on the other side now. It felt surreal.”

Even in September, New Orleans is tropical. On the bus that takes me to the offices of “Vote Nola”, I turn my face to the open window, greedily inhaling the late summer sweetness. I’m the only white person on the bus. Vote’s offices are situated on St. Bernard Boulevard, a quiet area with small, Southern style wood houses surrounded by gardens full of abundantly blooming flowers on the brink of the bad part of the city.

In a large, sunny office space, Norris looks somewhat lost at his desk near the entrance. He founded “Voice of the Ex-Offender – Vote” a year after his release from Angola. Today, it’s an important advocacy group which is heard by committees and task forces working to reduce America’s mass incarceration both in Louisiana and on the federal level.

Norris, 58 now, is wearing a red hat and a football shirt that’s two sizes too large. It’s got the number 7 on its back, Colin Kaepernick’s number, the black San Francisco 49er quarterback who recently refused to stand and put his hand to his heart during the national anthem. Instead he knelt, protesting about police violence against black people in America.

Louisiana is the state with the highest incarceration rate in the United States. Over 800 out of 100.000 inhabitants live in jail, a total of 36,300 people in 2016. In Germany, it’s only 78 out of 100.000. Louisiana is the sad incarceration champion in a nation that is the world’s incarceration champion. No other nation locks up as high a percentage of its citizens as America. African Americans are disproportionately affected. “One out of 14 black men from New Orleans is in prison”, says Norris. “On the national level, we make up 35 percent of the prison population, while we make up only 13 percent of the overall US-population.”

When I was waiting for a street-car that morning, a huge white guy in a stained salmon colored shirt, his white hair slicked back into a pony tail, stood beside me. He started off the conversation on an odd compliment (“you got beautiful skin”) and asked what I was up to in New Orleans. I said I was interested in the reason’s for Louisiana’s high incarceration rate. “You know why that is? It’s real easy”, he says. “We got the most criminals. Saturday night they shot six people, one got killed. Never go North of St. Bernard”, he adds, vaguely pointing in the direction I was going. “You’ll get killed. This ain’t Disneyland.”

The reasons for America’s incarceration epidemic are manifold with its origins going back decades. It is a self-perpetuating and self-enhancing system. As with many others, Norris Henderson sees high penalties for minor offenses, such as possessing small quantities of drugs or drug usage. The hard sentencing goes back to the “War on Drugs” started by Richard Nixon in the early seventies, and his law-and-order-policies were perpetuated and invigorated by Nixon’s successors, not least by Bill Clinton’s 1994 Violent Crime and Law Enforcement Act. It is one of the reasons why Hillary Clinton has a truly hard time winning the hearts of African American voters. “When I was in prison, only one of three convicted for drug offenses was in there for profiting”, says Norris. “The others were in because they had used drugs.”

Louisiana has a tradition of particularly fierce law-enforcement against drug abuses. “It’s a cat and dog race in the legislative body”, Norris says. “Oh, you want to put a penalty of 10 on that? I’ll make it fourteen!” Louisiana also has a very high number of private prisons that host inmates from federal prisons for money. That, too, plus a lack of rehabilitation, runs up the numbers.

Norris was arrested and sentenced for murder in 1977, a verdict that was overturned as unlawful in 2004 after the Supreme Court ruled that the type of hearsay-accusation that was used during his trial could no longer be used as evidence. Norris believes that less people would be convicted, if the jurors knew what prison is like, but usually, ex-prisoners and their relatives are excluded from juries. Still, Norris is clearly reluctant to speak about his experiences in Angola.

Angola is one of America’s most infamous prisons. I have tried to gain access to this or another correctional facility in Louisiana, but my request is still being “considered” by the Department of Corrections today. Angola sits a two-hour -drive outside of New Orleans on a former slave plantation. “It’s basically a farm”, says Norris. 5000 prisoners live and work there. “On a typical day, you walk out five miles to the field; then you walk five miles back for lunch. Then same thing again in the afternoon.”

Norris worked in the fields for the first 90 days. As a trained mechanic, he was needed at the work-shop. Later, he worked in the prison library. Angola is known for its violence. But when I ask Norris about it, he just affirms that the conditions are brutal. Then he falls silent for a while.

Earlier during my journey, I sat on a bench in a hotel-parking-lot with another ex-convict, who would like to be known as Joe-Joe in this story. We are hundreds of miles away from New Orleans, at the Hilton Airport Hotel in Oakland, California. Norris Henderson has come to Oakland for a conference – it’s the first time activist ex-convicts from all over the country have come together to join forces in their struggle for prison- and justice reform. Norris was very excited all morning, pacing around, chatting, and I have lost him. That’s how I ended up out in the sun with Joe-Joe.

Many prisoners are reluctant to talk about prison-life. It’s a separate world they try to leave behind as best as they can. Joe-Joe’s account of his time in Folsom prison and Deuel Vocational Institution, however, is detailed.

“You get up at 5.30 in the morning. You go to breakfast. At Folsom, the prisoners eat sitting in a vast circle. The guards pass behind their backs, walking the circle, and pass out the food while they walk. When they have finished the circle once and come to your place again, you have to have finished your meal and you have to leave and somebody else takes your place.” Joe’s arm draws large circles into the air. “That’s how they feed a thousand people in an hour.”

“Violence! You have to prepare. When you’re weak, or you allow them to think you’re weak, they will take advantage of you. I worked out a lot back then, I was bigger then”, he says, and falls silent. Then he adds, “You better stay to yourself. Avoid all the wrong people.”

Joe was convicted for first degree murder. It was the eighties and he was living in the Bay Area. He was young. He ran his own business. He earned quite a bit of money. He took a lot of drugs. He partied hard. He lost quite a bit of money. He couldn’t afford his drugs any more. “Then I went and robbed and killed a drug-dealer.” He holds my gaze over that fact until I lower my eyes to my note-pad.

In his 27 years in prison, many men in his cell came and went. Some smelled. Some rambled. Some fidgeted. Some screamed and threw things around. Some were downright crazy. Some were just mean. “And the snoring, man. The snoring!” I wonder what type Joe was when he was still there.

“I deserved it”, he says. “I took it one day at a time, working hard to keep a level head. But you know, many, when they go to prison, it actually messes them up. Worse then what they were when they got in. (…).”

We are interrupted by loud voices in front of the congress center and walk over to see what is happening. A group of ex-con activists have spontaneously gathered in front of an HBO camera, shouting out their anger. “This is war man”, a tall black man with a base-cap cries, “This is war, and I’m telling you, they will have to find out what to do with the ‘unacceptables’.” “When they talk about us, when they create policies, they need to start hearing us, that’s what we are here for, to raise that voice”, another man shouts.

Back at his office in New Orleans, Norris will later say, that the conference went very well for him. He has met a lot of new people, had a lot of ideas. Indeed it looks like new alliances are beginning to form to end mass incarceration, not just among ex-convicts. At the “Vote”-offices in New Orleans, a framed newspaper-article sits on the window sill. The picture shows Louisiana Governor John Bel Edwards, a Democrat, signing a “Ban-the-Box”-bill surrounded by activists and staff. Ban-the-box laws are aiming at limiting background checks on job-applicants to facilitate finding a job after being released. On the federal level, Barack Obama issued an executive order with regard to federal jobs. Louisiana also recently created a “Justice Reinvestment Task Force” in 2015, to reduce its prison population. The costs have gotten out of hand. Money is a powerful argument and it has brought the movement new allies. Today, small-state, free-market lobby groups like the American Legislative Exchange Council (ALEC) are promoting legislation to advance rehabilitation, re-entry and criminal justice reform.

Norris Henderson’s phone keeps humming as we speak. He finally checks it, swears, and stands up. He has forgotten an appointment for physical therapy. “When I first got out, I didn’t want the phone”, he says looking at his device. “But then I realized, it tracks me, and I will always have an alibi. Some people complain about surveillance. But my phone is my ally, it’s my alibi.”

Continue reading the summary: Black America at the end of the Obama-presidency.